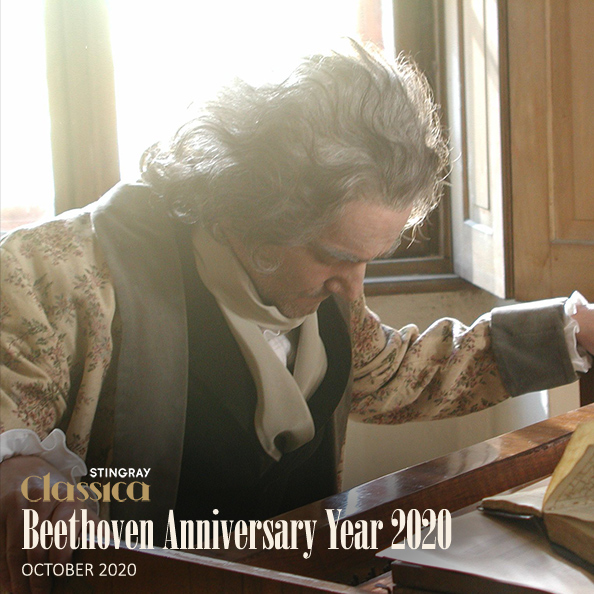 Ludwig van Beethoven is an immortal in the world of classical music. Despite his hard life, he composed some of the best classical music ever, and his name lives on to this day. His early life was difficult, growing up in a dysfunctional home with a strict father who was also his music teacher. At the age of 21, he moved to Vienna where he wrote his first opus in 1795. In 1800 he published his first major orchestral work, the First Symphony, and the rest is history.

Beethoven started experiencing hearing loss early in his career. By 1814 he was almost deaf, and the stopped appearing in public completely. He wrote some of his best work during this time of self-isolation and kept working until he died in 1827 after being bedridden for months due to illness.

Ludwig van Beethoven was born in 1770, making 2020 the 250th anniversary of his birth. All over the world, we honour the man who made himself a mainstay of classical music. Stingray Classica brings you a variety of programming dedicated to the music and the man. Let us celebrate his music and marvel at his persistence through the hardest of times to bring us some of the most beautiful music in the world.

On October 7, we learn more about Beethoven’s difficult last years through an unlikely source: a lock of his hair. Through science, we’ll discover the legend’s “medical secret” and learn of the impact it had on his life.

On October 14, we’re showing off his work through the capable hands of Seiji Ozawa, the internationally acclaimed composer. Sixty-three members of the Saito Kinen Orchestra will perform a rendition of Beethoven’s Symphony Nos. 2 and 7.

On October 21, we discover the ingenious device that Beethoven used to help him compose some of his best works later in life. The Hearing Machine is a marvel that allowed Beethoven to both hear and feel his music. Tom Beghin, a Beethoven enthusiast and researcher, helps us understand how the device enabled a deaf man to compose legendary music.

On October 28, our journey with the Hearing Machine continues. Mr Beghin will help us interpret Beethoven’s Piano Sonatas Op. 109, 110 and 111 with the help of the device, helping us gain a deeper understanding of Beethoven’s music.

Join us in our exploration and celebration of this great man and his music on Stingray Classica throughout October.

Wednesdays on Stingray Classica (ch 332) from the 7th to the 28th of October.