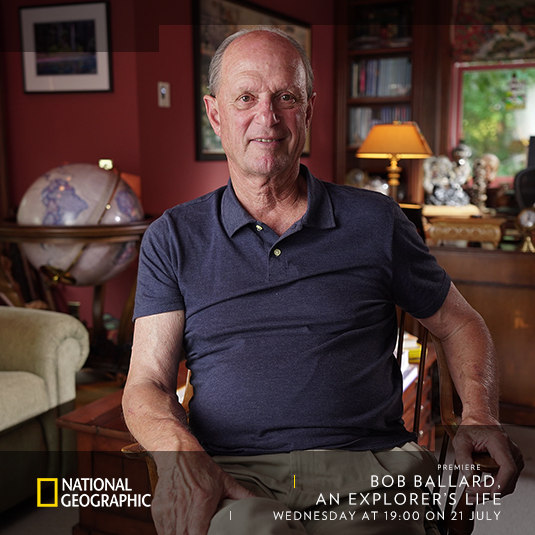 To Premiere on Wednesday, 21 July

Johannesburg 14 July 2021: Bob Ballard found the Titanic, the Bismarck and dozens of other lost wrecks. He helped prove the theory of plate tectonics, discovered newfound forms of life at hydrothermal vents, and pioneered the use of submersibles and telepresence for undersea exploration. Now, Bob Ballard: An Explorer’s Life which premieres on Wednesday 21 July at 7 PM on National Geographic (channel 220), reveals how deep-sea explorer Robert D. Ballard, a child from landlocked Kansas, grew to become one of the world’s most celebrated oceanographers with inside stories behind his most exciting discoveries.

Legendary National Geographic Explorer at Large, Ballard pioneered undersea exploration. He has conducted 157 deep-sea expeditions. Ballard is a pioneer in advanced deep submergence and telepresence technology. While he is best known for finding the wreck of the Titanic, he also discovered the PT 109 wreck, ancient ships and artefacts in the Black Sea, and many other famous sites and phenomena. In 2008, Ballard acquired his exploration ship, the E/V NAUTILUS exploits funded in part by NOAA’s Office of Ocean Exploration. Among his many honours, he holds the Explorers Club Medal, the National Geographic Hubbard Medal, and the National Endowment for the Humanities Medal.

Told through firsthand accounts and using the vast archives of National Geographic along with never-before-seen footage, this one-hour special takes an intimate look at his life to exploring how he became one of the world’s most celebrated oceanographers. Serving as a companion piece to the 2021 tell-all memoir Into the Deep, Bob Ballard: An Explorer’s Life reveals the inside stories behind those exciting discoveries while also sharing his triumphs, challenges and tragedies.

“For over 133 years, National Geographic’s core mission has been to ignite the explorer in everyone through thought-provoking, fact-based storytelling from scientists, explorers, photographers and filmmakers. No one exemplifies this mission more than Bob Ballard, whose career as one of the most celebrated undersea explorers of our time is rightly honoured. We hope viewers will be inspired by what is possible when persistent curiosity is combined with tenacity and technology.”

Catch the premiere of Bob Ballard: An Explorer’s Life on Wednesday, 21 July at 7 PM on National Geographic (ch 220)