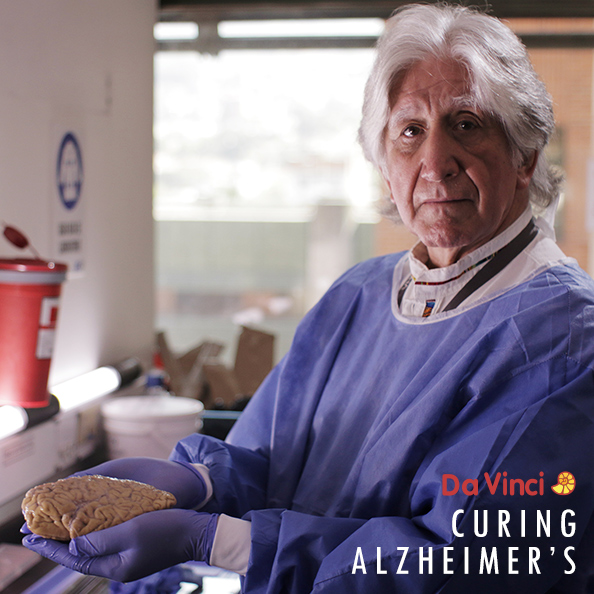 In 1996, psychiatrist Dr Alois Alzheimer had a conversation with his patient Ms Auguste Deter. Ms Deter was the first patient diagnosed with Alzheimer disease:

What is your name?
Auguste.
Family name?
Auguste.
What is your husband’s name? – she hesitates, finally answers:
I believe, Auguste.
Your husband?
Oh, no, no, no.
How old are you?
Fifty-one.
Where do you live?
Oh, you have been to our place.
Are you married?
Oh, I am so confused.
Where are you right now?
Here and everywhere, here and now, you must not think badly of me.
Where are you at the moment?
We will live there.
Where is your bed?
Where should it be?

Your brain cells, like all other cells, are made up of proteins that are used, broken down and recycled all the time. Plaques happen when a specific protein in a brain cell (amyloid precursor protein) cannot properly break down (gets sliced by a β-secretase instead of an α-secretase). Instead of dissolving, the cut part (β-amyloid protein) stays solid. These loose pieces stick together, forming plaques (β-amyloid plaques).

If plaques get big enough, it blocks the space between neurons, interrupting their signal, and can also trigger an immune response, causing inflammation. If they spread to blood vessels in the brain (amyloid angiopathy), it will weaken them until they burst (causing haemorrhaging).

Your brain cells, like all other cells, are supported with straight tubes (microtubules) that transport nutrients. These tubes keep their shape thanks to a protein inside the brain cell called tau. Plaques trigger its breakdown (kinase enzymes release phosphate groups that attach to tau and change its properties). Neurofibrillary tangles happen when enough tau stick together, breaking the tubes apart, triggering cell death (apoptosis).

By both blocking brain signals and killing cells, the brain shrinks (causes atrophy). The first sign of Alzheimer is short term memory loss because the part of the brain that controls that (the hippocampus) is damaged first. It then progressively spreads, depleting more and more mental faculties.

After memory loss, it affects your rationality. Then it becomes difficult to control your emotions. Paranoia and hallucinations follow. The most painful loss is that of long term memories. Eventually, the brain can no longer govern heart rate and breathing, resulting in death.

Alzheimer is not uncommon. Someone is diagnosed with Alzheimer disease every four seconds. At this moment, around 30 million people are suffering from it. Despite being a recognized and diagnosable disease since 1906, we still have no idea how to cure it. The main focus of researchers has been to slow its progression and buy patients valuable time.

Luckily, promising scientific discoveries may hold the key to treating this scourge once and for all. Innovative scanning techniques can detect the illness far sooner than ever before, and a new generation of drugs is giving patients and their families new hope. Tune into Curing Alzheimer’s to see how far we have come.