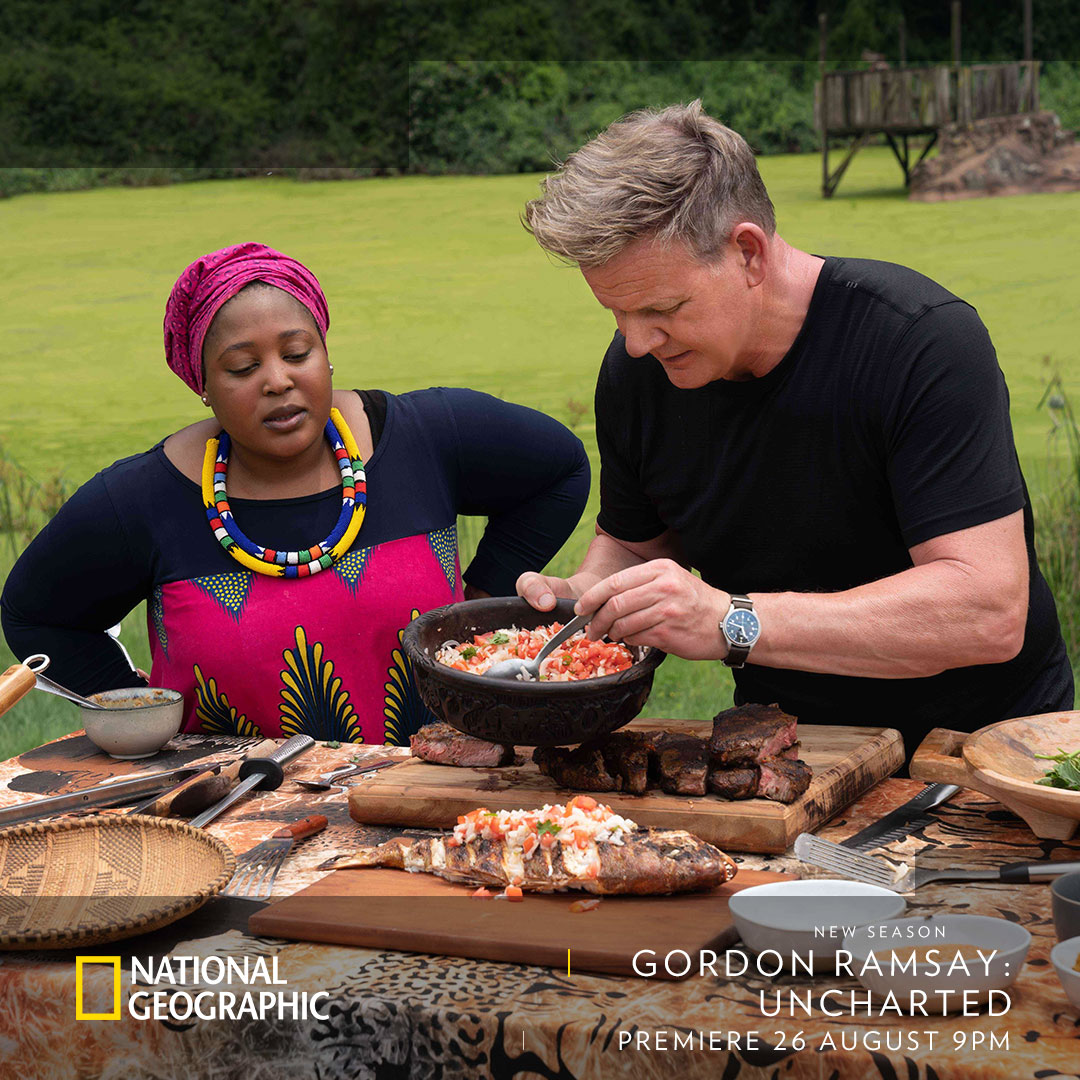 with South African episode 26 August at 21:00 on National Geographic

Johannesburg, 18 May 2020: Gordon Ramsay laces his boots, grabs his knives and buckles up as he hits the road again in the second season of Gordon Ramsay: Uncharted, premiering 26 August at 21:00 CAT on National Geographic (StarSat channel 220). The multi-Michelin-star chef and Ironman athlete continues his adventure across the globe in his relentless pursuit of culinary inspiration. Starting in South Africa, cooking with popular local chef Zola Nene, Ramsay turns up the heat and feasts his way through Indonesia, Louisiana, Norway, India, Tasmania, and Guyana.

“We are exploring seven new regions this season, each with vastly different culinary customs and history,” said Ramsay. “We get the opportunity to learn from the locals and hear their stories, and that gives us a much deeper experience and understanding of the world around us.”

In this new season, Ramsay journeys deep into the landscape of each place he visits, scaling mountains, battling 3-metre waves, braving frigid temperatures and bushwhacking his way through the backcountry to forage for some of the finest ingredients in the world. From swimming in great white shark-infested waters to participating in a traditional bull run, Ramsay risks life and limb in his biggest and boldest missions yet to achieve edible excellence.

Under the guidance of local experts and food legends he meets along the way, Ramsay partakes in culinary customs and learns about delicious delicacies and fresh flavours unique to each region. Every ingredient he harvests, dish he tastes and person he meets will inspire him to create a recipe from scratch, intended to represent the heart of that culture. Each episode concludes with Ramsay challenging himself during a final big cookout with a local food legend by his side, as they prepare a meal together for locals he met during his journey.

Some of the adventures — culinary and otherwise — that Ramsay experiences this season include:

“Gordon Ramsay: Uncharted became a firm favourite on the channel when it launched last year and we are thrilled that his latest journey begins right here in South Africa. Chef Zola brings her delightful charm and unique expertise to the table, guiding Ramsay on how to pull off the perfect chakalaka among other distinctly and deliciously local dishes”, said Evert van der Veer, Vice President, Media Networks, The Walt Disney Company Africa.

Chef Ramsay gets up close with rhinos, giraffes, zebras and hippos in the dramatic wilderness of KwaZulu-Natal, South Africa, as he learns the secrets of the traditional cuisine of Zulu warriors and masters using a local “braai.” He leaps from a helicopter into the raging Indian Ocean, harvests mussels on treacherous rocks and immerses himself in the local township culture, all before cooking with beloved local chef Zola Nene for a revered Zulu chief.

Chef Ramsay explores isolated Tasmania, off the coast of southern Australia. He uncovers the purity of the island, diving into shark-infested waters for giant saltwater spiny lobsters; avoiding venomous snakes in the bush while foraging for local herbs; and soaring in a seaplane to the rugged interior to fly-fish for trout and extract one-of-a-kind honey, all before facing off against culinary nomad Analiese Gregory to prepare an epic feast.

Chef Ramsay journeys to Louisiana to learn the secrets of Cajun cooking. He meets Eric Cook — a former Marine turned celebrated chef — who sends him off to get lost in the marsh and see what he brings back. In his quest, Ramsay faces down dangerous and delicious creatures from deep in the swamps to the middle of the Gulf of Mexico. Does he rise to the challenge, or do his skills end at the “End of the World”?

Chef Gordon Ramsay’s quest to master the world’s most fascinating cuisines lands him on the Indonesian island of Sumatra, where he risks his safety and his pride to acquire the ingredients he needs. Whether working as a deckhand in the open ocean, exploring a daunting cave system, milking buffalo or being dragged behind them, Ramsay finds his commitment to world-class cooking put to the test. With Indonesia’s own top chef, William Wongso, looking over his shoulder, the pressure is high.

Chef Ramsay heads deep into the South American rainforest to explore the culinary roots of Guyana. After rappelling from a helicopter into the jungle, he hunts for toothy caiman with his bare hands, fishes for piranha with a bamboo rod and crafts his own arrow to bow fish for arowana. With his newfound bounty of jungle provisions, he will join forces with local rising culinary star Delvin Adams to cook a feast for the local Amerindian tribe.

From the coast to the mountains of southern India, Chef Ramsay unlocks the complex flavors of the region known as the spice trade capital of the world. He battles ocean waves with a giant fishing net, fights the searing sting of fire ants, speeds through hilly dirt roads in a tiny rally car and has his mouth torched by the extremely spicy local fare, all before attempting to impress a women’s collective of artisan cooks with his take on their local cuisine. Tough-as-nails chef, food historian and television host Shri Bala takes Ramsay under her wing and gives him a lesson on India’s celebrated spice history.

Chef Ramsay channels his inner Viking and embraces the freezing temperatures of Norway in December to discover the elusive flavours of this region’s cuisine. He dives for shellfish in the frigid waters of the fjords, wrangles a stomping herd of reindeer with the Sami people, ferments fish and eats sheep’s head, all before putting his new skills to the test to prepare a Christmas feast with local chef Christopher Haatuft.

About Gordon Ramsay and Studio Ramsay

Renowned for highly successful and award-winning original programming, Emmy-nominated Ramsay produces TV shows on both sides of the Atlantic seen by audiences worldwide in more than 200 territories, and he is the only talent on air in the US with four prime-time national network shows. He hosts and executive produces “Hell’s Kitchen,” “MasterChef,” “MasterChef Junior” and “Gordon Ramsay’s 24 Hours to Hell and Back” all on Fox, in addition to yearly “MasterChef Celebrity Showdown” specials.

His multimedia production company Studio Ramsay is behind several hit shows in both the US and the UK, with a growing slate of new shows and development. Launched in 2016, Studio Ramsay was created to develop unscripted, digital and scripted programming, focusing on new formats and innovative programming as well as fostering new talent. Studio Ramsay is behind the highly successful FOX series “Gordon Ramsay’s 24 Hours to Hell and Back.” It is also behind Gordon Ramsay: Uncharted on National Geographic Channel, which airs in 172 countries and 43 languages worldwide, accompanied by a first-of-its-kind stand-alone Gordon Ramsay: Uncharted digital and print magazine. In the UK, Studio Ramsay produces the BAFTA-nominated “Gordon, Gino and Fred’s Road Trip” for ITV, which is currently airing its second season. The Studio is also behind the upcoming Channel 4 Series “The Fantastical Factory of Curious Craft” and is opening the doors to London’s iconic hotel, The Savoy, in a five-part docuseries for ITV. The Studio is also behind the Channel 4 Series “Born Famous,” which was released last summer. Studio Ramsay also has shows in various stages of production and development for the BBC, top UK broadcasters as well as top US cable outlets. Studio Ramsay’s Digital Division is behind all of Ramsay’s original content on his highly successful YouTube Channel, for which Ramsay recently became the most subscribed chef on the platform. The 18-34 dominated channel launched the trending interview series “Scrambled” and plans to launch further series in 2020. Studio Ramsay Digital has also produced content for National Geographic and MasterClass, and is in development on other opportunities in the space. Studio Ramsay was behind the daytime cooking series “Culinary Genius,” which premiered on ITV in the UK and syndicated on FOX stations in the US; the ITV series “Gordon on Cocaine”; and FOX’s “The F-Word Live With Gordon Ramsay.” The highly popular children’s series “Matilda and the Ramsay Bunch,” starring Tilly Ramsay for UK children’s channel CBBC, is also produced by Studio Ramsay.

About The Walt Disney Company EMEA:

The Walt Disney Company, together with its subsidiaries is a diversified worldwide entertainment company with operations in four business segments: Media Networks; Parks, Experiences and Products; Studio Entertainment; and Direct-to-Consumer and International. Disney is a Dow 30 company and had annual revenues of $69.6 billion in its last fiscal year (FY19).

Seeking to entertain, inform and inspire people around the globe through the power of unparalleled storytelling, The Walt Disney Company has been in Europe, Middle East and Africa (EMEA) for over 80 years, employing thousands of people across the region and reaching consumers in more than 130 countries. The Walt Disney Company’s iconic brands – including Disney, Pixar, Marvel, Lucasfilm, National Geographic, FOX, FOX Sports and ESPN – are experienced diversely across the region in cinemas, on TV screens, online, at retail, in Disney Stores and at Disneyland Paris.

How to tune in: