01 Jul Origin of the Species

Posted at 13:33h in Aljazeera, Blog, Documentary Show by Support 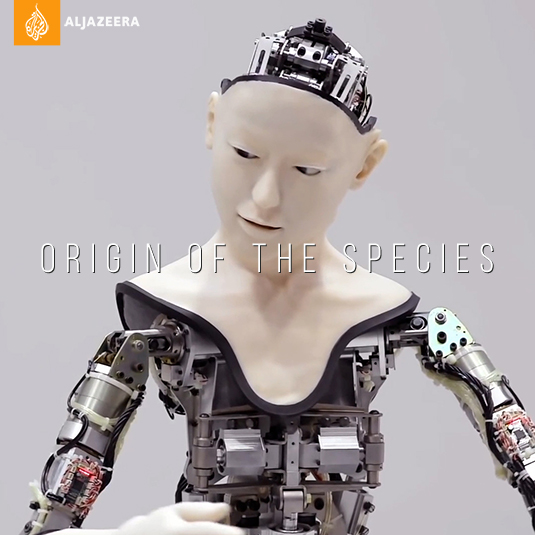 Origin of the Species

Rossum’s Universal Robots by the Czechian writer Karel Čapek was the first work of literature to use the word robot: machines that resemble our form and mimic our behaviours.

Before we had a word for it, however, writers and storytellers have explored the ideas of artificial humanlike life since Ilmarinen made himself a wife out of gold and silver in a prehistoric Finnish folktale.

Our idea of what an artificial being might look like has changed as our technologies have. Robots in Greek Mythology got moulded from gold, clay, and ivory. Talus is the iron man who helped Arthegall to dispense justice in Book V of The Faerie Queene, published in 1596. In 1818 a story is published of a man, made of men, brought to life by lightning and machine by a madman named Dr Frankenstein. The Steam Man of the Prairies launched the science fiction subgenre of Edisonade, stories of brilliant inventors and their genius creations.

Robots could either be remote-controlled by humans or have minds of their own. They could be any shape and size, from the most primitive of clay blobs to beings so close in appearance to humans they became indistinguishable. As medical science improved, stories of humans fused with robotic parts caught people’s imagination.

No matter their materials or forms, robots serve to tell stories that explored profound themes. Artificial companionship was one of the first, creating a lover so that you need not find one of your own. Today, sex robots are a thing: skin-covered robots designed for our pleasure. Another common theme is exploring the dangers of making life and those creations eventually destroying us. Military robots are thought by many to be the future of warfare. They do not cease, and they never miss. As technology continues to replace people in the job market, the fear of being replaced by robots has become a vivid fear in the modern mind. Today, robots are becoming increasingly lifelike. In bad lighting, they might even be mistaken for their human counterpart. Robots aren’t only outside ourselves anymore. As medicine becomes more advanced, technology to replace our faulty parts becomes even more impressive. Prosthetic arms can now move upon the instructions of a user’s brain. The question of where the human ends and the machine begins has become a prominent one.

Our show, Origin of the Species, explores how far robots have come, the opportunities they present, and the dangers they may hide.