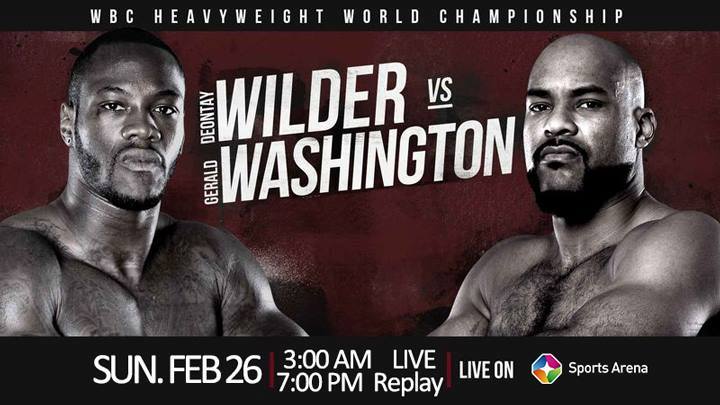 Posted at 09:47h in Uncategorized by Nadine

Deontay Wilder does what heavyweight champions are supposed to do; knock people out.
The man who holds the WBC title has only gone the distance in a fight on one occasion in 37 bouts. He is undefeated.
This weekend he will be looking to keep his famous WBC championship belt when he defends the title against Gerald Washington on ST Sports Arena (channel 241). The fight is on Sunday morning at 03:00.

The odds are heavily stacked against Washington. He took the fight as a replacement after Andrzej Wawrzyk tested positive for a banned substance. The 34-year-old US Navy veteran is ranked eighth by the WBC and many pundits are expecting Wilder to stop him.

If this is what Wilder is also thinking then he might find himself in serious trouble.
Washington is undefeated and has beaten contenders such as Eddie Chambers and Amir Mansour.
Washington is not a man going order valacyclovir valtrex into the fight looking to just make up numbers. He already has plans of fighting in the UK after he beats the champion.

“I would love to go to the UK and fight in a stadium,” he recently told boxing website Behind The Gloves.
The challenger will also not be overawed by the occasion as he is a former American football college star. He has played in front of a crowd of 90 000 before so the Birmingham, Alabama crowd will not be a problem.
So can Washington pull off the upset?

At 1.98m tall he will not be bothered by Wilder’s size (2.01m). He is also known for his educated jab.
The champion’s fans will also be looking to see what condition Wilder comes in as he is coming back from an injury lay off after his last fight against Chris Arreola.